Ian Horsburgh’s wife didn’t want him to run the New Year Sprint, but she’ll be glad he didn’t listen as the entire family is soon going to Disneyland Paris to celebrate dad’s famous victory at Musselburgh racecourse yesterday.

The Central AC athlete and Calnex Solutions employee made it third time lucky in the 110m handicap following a fifth and an eighth in two previous finals in the late 1990s, and it was the perfect early birthday present as he turns 42 next Friday. He also picked up the Eric Liddell Trophy plus a cheque for £5,000.

All the pressure was on Horsburgh after clocking the quickest time in Monday’s heats and yesterday’s cross-ties (semi-finals), but the former 400m runner still had the necessary speed endurance to cope with two races in less than two hours yesterday afternoon.

Starting off 10.25m, the title favourite caught club-mate Cameron Smith early on and held off Lasswade teenager Murray Blair and Edinburgh’s Stacey Downie to break the tape first in 11.81secs.

“I’ve always wanted to win this!” he admitted. “My wife didn’t want me to run because she’s seen me have disappointments before, but I felt I had a big chance this year. Thank you to Billy Duff who told me to enter and train hard. 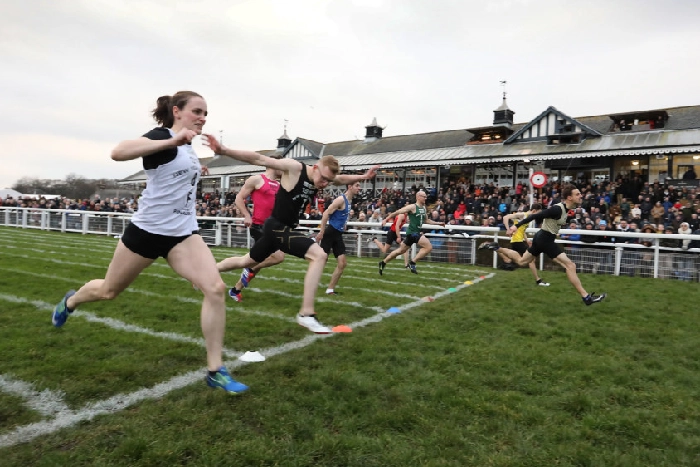 “I knew I was catching Cameron and I stayed relaxed for the rest of the race, but even when I crossed the line I wasn’t sure I’d won it until I heard my name called. I felt good this morning and felt fresh after Monday, but I had to get used to running on the grass again. Lane four is a good lane because a lot of previous winners have been in lane four, but my biggest worry was Murray Blair. He beat me in a race last summer, and I was determined not to let him beat me again! I dipped at the finish because I know people have lost it before on the line."

“I ran really well as a junior, especially at 400m, but I then had injuries and didn’t progress. I had 13 years off and had children, but I found some energy to train again when the kids started sleeping. I wanted to let them see me run rather than telling them about it. I think we’ll be going to Disneyland Paris as a celebration.”

Blair took second place a metre back in 11.91, but the 18-year-old conceded: “Ian’s a really good runner and he deserved to win that. I thought I was there at halfway, but the track was quite heavy and he pulled away. Crossing the line, I knew he’d won it, but it’s an improvement on fourth place last year and hopefully I’ll be back again next year.”

Despite only qualifying as a fastest loser, Downieused her 19m start and her 400m strength to grab the final podium position in 11.99, just 0.02 of a second ahead of Giffnock’s Kyle McLean. “I was ill a couple of weeks ago and didn’t think I’d be here today,” she revealed. “I wasn’t far off winning and probably needed an extra metre, but I went one better than in 2016 and also won the 90m on Monday, so it’s been a welcome start to the New Year. I’m off training in South Africa now.”

2018 winner Calum McWilliam, pictured, finished dead last this time in 12.25 but deserves enormous credit for reaching a fifth successive final. “I didn’t have it in my legs for the final,” he said.

“My fitness let me down at the end, but I can’t complain about making five finals. I’m living in Amsterdam now, so it depends where my career is next year, but it’s become something of a tradition and I’d love to run it again.”

Zooming in on growth

Once again, Calnex will be a Diamond Sponsor for this year’s International Timing…
2429 Read more

The objective of the symposium, to be held in Portland, Oregon, USA, is to…
2242 Read more