The fifth generation network presents new challenges for Synchronization. As the demands for constant connectivity drives the deployment of small cells – this coupled with increased network accuracy – the importance of testing for accurate sync throughout the network becomes ever more prevalent. The problem with small cells however, is that they tend not to have physical timing outputs (1pps), therefore testing the timing performance of a small cell – whether it be a Femto, Pico or Macro cell can seem impossible. In addition the network output, which is the air interface, now has an ITU-T timing requirement of 1.5µs and for 5G this will reduce significantly for certain segments of the network. 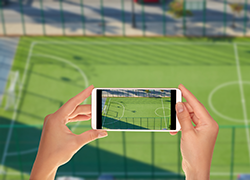 Small cells can be deployed in many environments, whether be the home, shopping malls, sports arenas or wide open public spaces. The different categories, each have different characteristics depending on the space/environment that they would be deployed in.

With some 4G and 5G applications, enhanced Inter-Cell Interference Co-ordination (eICIC) where there can be a cluster of small cells, all interacting with each other, essentially sharing time information. If there is one small cell that is out of Sync, then that will interfere with the other small cells within that application, and throw out the timing of all the other small cells – the one ‘bad’ small cell could be considered a ‘rogue’ cell affecting everything it interacts with.

So with current Sync testing methodology you can see where the challenges are for testing Time and Phase in certain parts of the network. Over-the-air (OTA) on the Calnex Sentinel provides telecom operators with the ability to measure the Time Error (TE) performance of a network at the network output - the antenna/air interface. OTA can measure that final ITU-T network requirement of 1.5µs, which this can only be measured on the output of the Base station antenna. Additionally, it enables the testing of small cell deployment, as small cells lack the necessary physical output port (1pps) to measure TE accuracy – OTA Time Error testing is the only viable option.