The dark fibre used by CPRI connections is expensive to install, nor is it fully utilised by a CPRI connection. Some proposals were made to carry CPRI over WDM, enabling sharing of fibres between closely sited RRUs. However, the next major step in the evolution of fronthaul was to consider if the CPRI protocol could be transported across a shared network such as Ethernet.

The CPRI consortium created a new specification called eCPRI. They don’t actually specify what the “e” stands for, it could be for Ethernet (but it also works over IP), Evolved (but this was the term used to denote 4G over 3G) or Enhanced (which is my personal favourite). The eCPRI specification defines how to carry radio signals over a packet network. The underlying networks are not defined, but can include IP/UDP and/or Ethernet.

The IEEE are also in the process of creating an open standard for the same thing, designated IEEE1914. This is split into two parts, the radio over packet protocol (IEEE1914.4) and the requirements on the underlying transport network (IEEE1914.1). 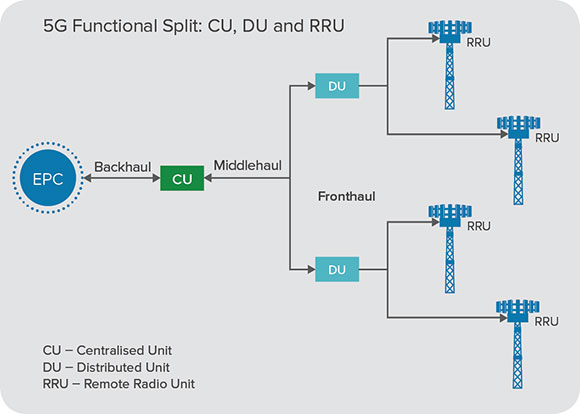 The main feature of both of these is that the functions of the basestation are split into three parts – the CU (Centralized Unit), the DU (Distributed Unit) and the RRU. One reason for this is that carrying a radio signal across a packet network is very inefficient, especially for 5G where the data rates are very high. The RRU connection may require a data rate of 25Gb/s or higher. The DUs can be located out in the network close the to RRUs. The connection from the CU to DU can be lower bandwidth, because carrying the raw data is more efficient than the encoded radio signal. This connection is sometimes referred to as the “middlehaul”.

A second reason is that some functions are very latency sensitive, limiting the length of the connection to a few kms, as with the original CPRI interface. If those functions are located in the DU, the less latency sensitive portions of the basestation function can be located further back in the network. This last piece enables the transition from Centralized RAN to Cloud RAN – the CUs can be located anywhere in the network, not just in a localized “baseband hotel”. 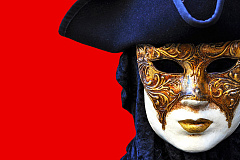 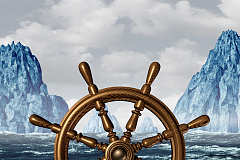 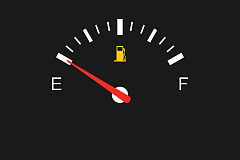